It is easier to invent myths than it is to dispel them. That is why, 60 years after the creation of the State of Israel, and despite the research carried out by the Israeli « new historians » in the Eighties, many of the falsehoods survive and continue to be spread by western propaganda. Just as repetition is used as an element in comedy, when repetition is based on a lie it becomes a tragedy.

Although the resistance and struggles of the Palestinians have severely strained a certain number of « beliefs », starting with the non-existence of the Palestinian people and the famous « land without people for a people without land », others remain ingrained. The myth of « David against Goliath » has certainly taken a beating, Israel having become one of the biggest global military powers, and the only one in the Middle East with nuclear weapons. But it is still perceived by many as a democratic, secular, modern – even a pioneer – state, as part of the West, and obliged to resort to force in order to protect its safety, and that of Jews in general. Despite its « desire for peace » and its « generous offers », Israel has supposedly found no Arab partners willing to recognize its right to exist.

Since 11 September 2001, it has even obtained the status of a spearhead in the « war against terror » and « against Islamism ». A few in the media sometimes dare to deplore its « disproportionate » reactions, but the ever-present propaganda combined with the accusation of anti-semitism masks the fact that the State of Israel has been built on perpetual deceit ever since its creation.

Israel is a militaristic, racist and rapacious state; it uses religion as a tool for its own ends and has always refused to define its borders. Its selective democracy is coupled, in the most shameless manner, with systematic terrorism. Far from defending Jews, Israel uses them – whether it be the population of Israel or the Jews of the diaspora – and represents a significant danger to world peace, as proven by the facts set out in this brochure. These facts have been reported by direct witnesses, and very often by Israelis themselves, whose voices are absent from almost all the mainstream media.

Since 1948 the official history of Israel has been based on the lie that the 800,000 Palestinians who became refugees had left voluntarily, at the request of the surrounding Arab states. The reality is that the expulsion, using any methods, of a maximum number of non-Jewish inhabitants of Palestine had always been aim of zionism, one as old as the idea, first mooted at the end of the 19th century, of the creation of a Jewish state in Palestine.

« The Arabs must leave, but we need the right time for that to happen, for example, a war ». This was written in 1937, in a letter to one of his sons, by the leader of the zionist movement and future founder of the State of Israel, David Ben Gurion. 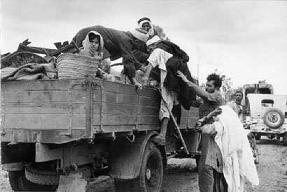 With the announced departure, as of 1947, of the British presence, the zionist leaders saw that the balance of power, both diplomatic and military, was from then on in their favour.

On 10 March 1948, a group of officers convened by Ben Gurion approved the final details of their « Plan D ». It contained a description of every village in Palestine, with detailed plans to attack each one of them, to drive out their inhabitants, and even to summarily execute hundreds of men, whose names had been put onto a list of « suspects ». « Plan D » was then distributed, for immediate execution, to the officers of the 12 brigades of the Haganah, the Jewish army, which was then being developed at lightening speed, in terms of numbers as well as modern equipment.

From mid-March until 15 May 1948 – the planned departure date of the last British soldiers from Palestine – it was not « the first Israeli-Arab war », as the official story would have it, but instead a vast ethnic-cleansing operation launched by a 90,000-strong Haganah – up against which the Palestinian resistance could only muster a few thousand village militiamen with pitifully few weapons.
From the month of March, at least thirty Arab villages were wiped off the map, in accordance with the plan: first surround the village, then round up the population, give the order to flee, and take aside the « suspects » for immediate execution. Following the pillaging and violence, all the houses judged unsuitable for Jewish dwellings were destroyed, sometimes all the houses in an entire village, on the ruins of which would be built the kibbutz and other Jewish colonies.

One of the most bloody episodes has stayed in the annals of history: the massacre of the villagers of Deir Yassin near Jerusalem on 9 April 1948. The leaders of the Jewish state blamed the so-called « extremist » militia of Irgun and swore that Haganah could never have deliberately killed women and children. False! Not only because there were many other martyred villages, where Haganah was operating on its own, but also because Haganah did indeed take part in the carnage at Deir Yassin.
.
After the villages came the towns: the major Palestinian towns of Jaffa, Nazareth, Tiberiad, Acre and Haifa were attacked and their Arab inhabitants had to flee in their thousands.

Amongst the most spectacular episodes of this phase of the Palestinian tragedy, one can cite the « exploits » of two young Israeli officers destined for brilliant careers: Moshe Dayan and a certain Yitzakh Rabin, who ordered the expulsion of the 70,000 inhabitants of the Arab towns of Lydda (Lod) and Ramleh. The exodus of the Palestinians, forced to take flight with no food or water and under a sweltering sun, turned into a death march for hundreds of children and old people.

When this first phase was completed, during which there was no intervention by the neighbouring Arab countries, more than 10,000 Palestinians, most of whom were unarmed civilians, were killed by the zionist forces and at least 300,000 were forced to flee.

The leaders of the Arab states, just like the zionist leaders, did not wish to see the creation of an independent Arab state in Palestine. That is why, when they did intervene in Palestine after 15 May, it was merely designed to calm the emotions of their own public opinion, moved by the unfolding tragedy of their Palestinian brethren; they sent small forces which were inferior in number and weapons and no match for the power of the Israelis.

Finally, the battles with the Arab armies were interrupted on several occasions by order of the United Nations, whose major powers – principally Great Britain, the USA and the USSR – had not yet clearly determined who could be their allies or regional puppets. They allowed the king of Jordan to take over the West Bank and half of Jerusalem, and Egypt to occupy the tiny Gaza Strip, saturated with hundreds of thousands of Palestinian refugees who had been chased away by the new Jewish state. The latter was allowed to increase its size to occupy 78% of the land. There was one undisputed loser in the struggle: the Palestinian people. The situation on the ground remained unchanged until 1967.